This was our second week on our new school year plan. We had two weeks off after state-mandatory testing, and we are all actually relieved to be back to structured living after several months of first-trimester-induced flying-by-the-seat-of-our-pants.

Well, as far as real life goes, the excitement of [last] week was the ceiling cracking open! I heard a strange noise, went around investigating, and ended up at the game closet, where I found this:

We quickly evacuated our extensive board game collection (it’s my husband’s hobby), and just in time! Water was coming through the crack, which eventually split entirely open, dropping mounds of insulation all over the place. There was much excitement. Translation: Ilse utterly freaked out, suddenly fearful that the entire house was about to collapse on us all. “What will we do?” she went around moaning. Daddy was able to come home, figure out the leak was from the roof around the chimney, and get it all patched up and cleaned up. And now the game closet is clean and organized!

In other strange real life news, after putting Ilse to bed one night I noticed this in her room: 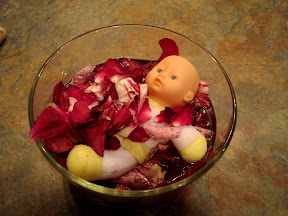 Now that’s the way to pamper your doll! 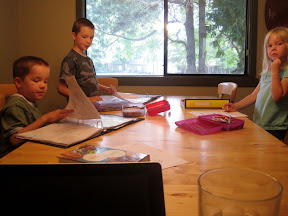 We did Circle Time every morning except Mondays these last two weeks, and much to my relief, it all does fit in under an hour. Now I just need to figure out how to prevent Knox from fussing and trying to interrupt and steal the show. My current strategy is ignoring him unless he wants to sit quietly on my lap. After he was done breaking his crayons and taking off their paper, he’s not at all interested in them or coloring.

Hans has taken 2-3 hours to do his independent work that should take one hour, and I am pretty sure I am not being unreasonable in expecting it done in an hour. Some of it is unfamiliar work that will probably speed up as he gets used to it (he’s writing more than he ever has), but mostly he is dawdling and not putting all his attention into his work. I’m pretty sure that as the summer goes on and friends want to play more, his motivation to get his work done will increase.

We fell off the ball with Latin halfway through the year last year, so we’ve been mostly reviewing and finishing up the lesson we ended. Next week we’ll begin with new material, although I might have to move our Latin lesson to the morning. Right now I have us doing Latin during our “tutoring” time when I check his independent work, but when he’s not done until 4, I’m simply not at a place where I can do Latin, either energy-wise or time-wise. If his independent work end time continues to be this flexible and unpredictable, we’ll have to figure out a more standard time to get Latin done. Not working that out last year was part of the reason it got dropped. However, he’s been writing an original sentence in Latin every day these last two weeks, and I’m pretty pleased with them so far.

And here is my view during Circle Time: 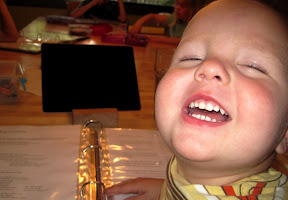 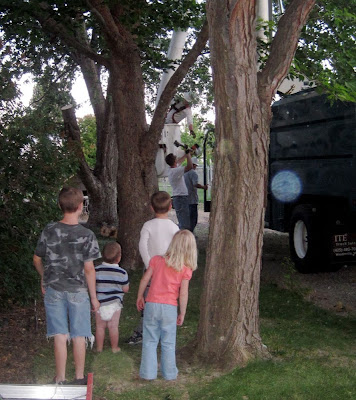 We had a field trip come to us Wednesday evening! We’ve had heavy winds lately and found that a large spur of a large maple tree was cracking. Good thing we have a tree-trimming brother-in-law with his own truck, chipper, and huge chainsaws! We let the kids stay up over two hours past their bedtime, watching the action. Knox saw the truck come around the corner from the window and exclaimed immediately, “Woah! Big truck!” He lives to see big trucks, so he was in absolute heaven. I’m pretty sure he is ready to sign up as a tree-trimming apprentice right now. 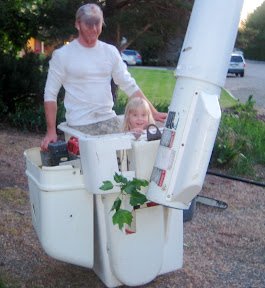 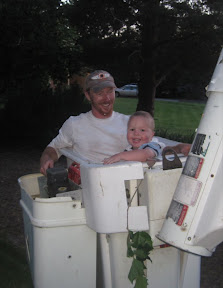 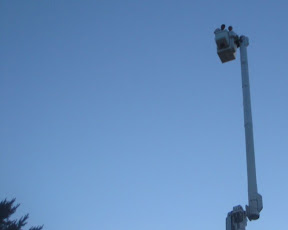 Hans requested on his ride that stay stop on their way down at the top of the cherry tree so he could pick some cherries from the top. Uncle Daniel was happy to oblige, and Hans was pretty pleased with himself. Knox spent almost the entire two hours repeating, “Big truck! Big tree! Big wood! Big truck! Loud! Timber!” When Uncle Daniel finally pulled away in his impressive truck, Knox sighed, “All gone big truck with lights on?” I imagine he had some great dreams that night.

Some Books from This Week

I think the fresh school books are a hit, because both Hans and Jaeger were found Saturday and Sunday curled up with the new science books I added to the shelf last week.

It is more important to me that we have an atmosphere of reading, talking, and interest in our home than that a certain number of checkboxes are accomplished, so this pleased me immensely.

I’m a week late to declare my June goals, but here they are, nonetheless:

My “inbox” cupboard in particular is a total wreck, and all the cupboards need a good purging and reordering.

I tend to skip reading to the little ones too often, even though I do believe it is a very important thing to do. I need to act upon what I know.

I want to join into Nester’s 31 Days series meme in October, but I want to write them all ahead of time so it can fill in for a maternity leave. There’s no way I’m posting every day in October, since I’m due October 28th! She will be a November baby, but October is not going to be a good writing month for me.

What’s for Dinner this week 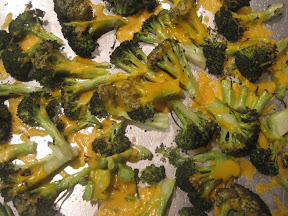 My other blog, Simple Pantry Cooking, has our weekly menu posted.

For the rest of the month, I’m going to be mostly posting homeschool material reviews. Stay tuned!

Faithful Follow-through Not only did we have Christmas break this week, but my husband also... October was crazy. Crazy like I have 5 school-age kids including 2 teens kinda crazy.... I think I might have written more words than I read if you don’t count... ~ Capturing the context of contentment in everyday life ~ We’re done with our school...

1. This week in our homeschool My literature class with middle schoolers starts next week...