Knox likes to think of himself as one of the boys, so he is always in people’s business – or in their shoes.

In fact, I am having to change the way I refer to my groups of children. For years now I have referred to Hans and Jaeger together as “the boys.” So the other day I called, “Boys! Would you please run this over to the neighbor’s house for me?” They love that task, so they went at it with gusto. As I listened to them leave, though, it seemed like perhaps another exit had been made. I opened the door, looked out, and saw 2-year-old Knox at the end of the walkway.

“Knox! Come back here! You are not allowed to open the front door or go in the front yard without me!”

He shouted in return in a somewhat injured tone, “I a boy!” 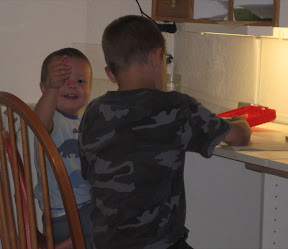 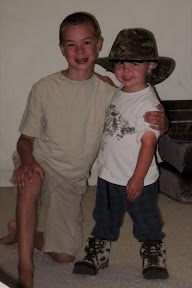 Tuesday was Hans’ birthday, so we didn’t do school, but the week before we were quite regular with Circle Time and with math. Just before our vacation the boys had both hit a wall in math after cruising through at a fast clip for a few weeks. So we came back to our books and I offered a pep talk about pretending we’d never encountered these lessons before and we’d go over the video lesson together and I’d help them through their first page of equations.

This was apparently too much for one of my students, who immediately broke down.

“Why do I even need to do division?! Isn’t multiplication enough?!”

I did my best to keep a straight face while reminding him that, actually, he wasn’t even in division yet, he hadn’t finished covering multiplication, and that, yes, there was still much math to be mastered in his future.

His response made it clear that he thought learning his times tables was a good place to end his math career.

I had to burst that little bubble.

It turns out, however, that multiplication does bring out the poet in my more linguistically minded student.

And, by the end of the day, he’d conquered his vexation and was pretty pleased with his victory.

Some of my friends are amazing cake decorators. And even I, a terrible cake decorator, was able to create a few train cakes back when the older two boys were younger. Turns out that trains are not satisfactory with the elementary set, and my skills are not at all up to the sorts of requests they can come up with.

So I have a strategy of my own. 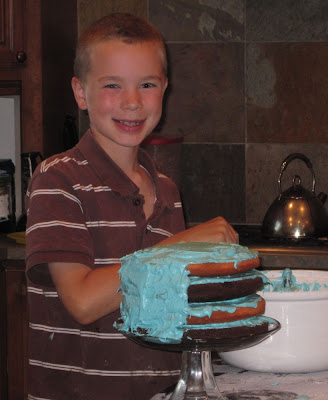 Starting at 6, the birthday child gets to make his own cake – all by himself. This, so far, thrills them, and adds a little extra swagger to their step when they asked by their friends about their cake.

This year Hans said he wanted 2 flavors layered. He picked out 2 cake box mixes (maybe at 10 I’ll introduce him to cake recipes): chocolate & strawberry. When he made them, I was even in a completely different room. I set the oven to the correct temperature and I explained how to butter a pan, and that’s all the input I had in the matter.

He did a fantastic job! He even frosted it all by himself, and frosting a layered cake is no small feat.

Ever since getting Simplified Dinners up and running and selling, I’ve wanted to have a sales pitch video on the main page. I had written the script for it before it all went live five months ago, but never gotten around to buckling down and figuring it out and doing it. I don’t know why, but I thought it’d be simple: put on some make-up, practice the script, and record it a couple times until it turned out. We had no technical difficulties, but it became apparent as soon as I sat down to practice the script that my delivery and speaking ability was going to make this a rough project.

I had made innumerable attempts and spent probably a total of 3-4 hours just trying to spit my words out straight, and was finally making some headway around 7pm. And I was determined to pull it off that day. I wasn’t going to waste the makeup and hair job. Then Matt found a free online teleprompter, I typed my now-abbreviated script into it, and I was finally able to pull off a reasonable video.

And here it is, for your viewing pleasure:

And in no time at all after I finished my end, Matt had it on YouTube and on the main Simplified Pantry page. Success! Hop on over to the 5 Days of Cleaning & Organizing main page and check out all the other great topics to be covered, as well as information about a bunch of giveaways during the week! ~ Capturing the context of contentment – in my kitchen. ~   We’re having...

1. Thinking We must therefore allow children breathing-time from perpetual tasks, and remember that all...

Faithful Follow-through My latest innovation is doing the girls’ hair during Morning Time. I was...

I didn’t get in a pretty, happy, funny, real post yesterday, even though I do...

My third-born daughter turned six last week. She is one bundle of pretty and happy...