I got my housecleaning day in, and we made a venture out to a quiet in-town “naturalized” area for our first nature walk of the school year. 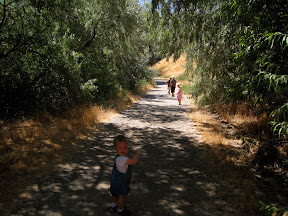 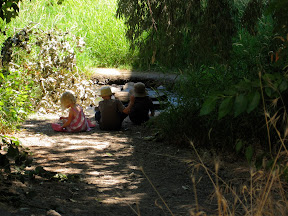 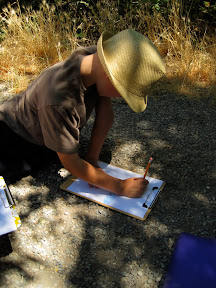 First day of school. We started the day with our typical yogurt-and-granola fare. I learned my lesson last year and did not start the day off with sugar.

We actually got started only ten minutes after scheduled, even though I was still a bit scattered when it came to the organization. I did not do all the finishing touches I had been hoping to do during swim lesson weeks. I pretty much did nothing but keep my head above water during swim lessons. So I was scrambling a bit, but we hit the ground running anyway. 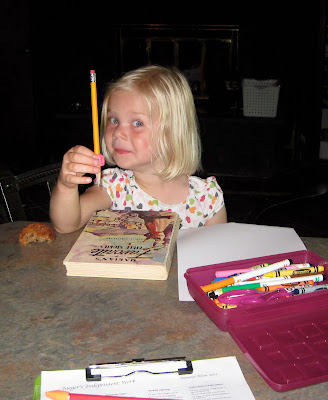 We were able to cross out everything on our checklist for the day, a feat very rarely managed last year. Not only that, but we all kept cheerful attitudes to boot! Jaeger was thrilled to have his own independent checklist. Hans is thrilled to be beginning Latin. Ilse is thrilled to have her own Mommy-time with her own Bible story book. Knox is not so thrilled with his arrangements: 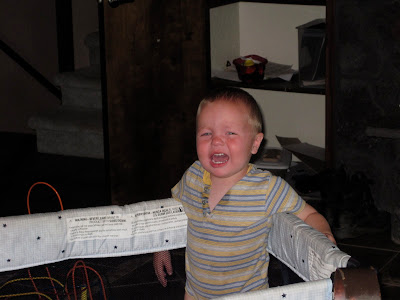 On Wednesday my neighbor-friend came in during Circle Time to borrow a stick of butter. Knox was all grins for her, until she started heading for the door. He yelled. He rattled the wall of his cage. He cried to her, “Don’t you see how they’re treating me?! You aren’t going to leave me here like this, are you?! Where are you going? Free me!!”

And that was his general attitude about being confined in the pack and play every day. Unless, that is, he realized he was being photographed. 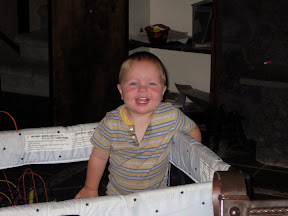 But if he’s not contained, he is actually not all over the house getting into toilets and outlets, he’s in everybody’s business. 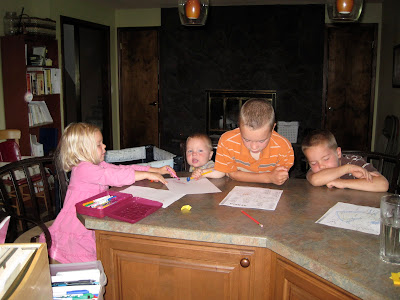 So I’m working on plan B for K-Bomb.

Our adjusted schedule which we are doing the entire summer worked like a charm all week, and allowed us plenty of time to prepare for and leave for playgroup at a sprinkler park on Wednesday. One-and-a-half hours in the morning, and two hours in the afternoon. As long as I give up my afternoon zone-out time in front of the computer screen, and actually take a short power nap instead, it works splendidly. This adjusted schedule will be our typical Wednesday plan, so that we can continue meeting with our friends. Playgroup has been a good part our kids’ education in life: sharing, honoring house rules, being kind, being friendly — all important skills.

The quote of the day was from Jaeger: “Last school didn’t go so well, but this term is so good!” 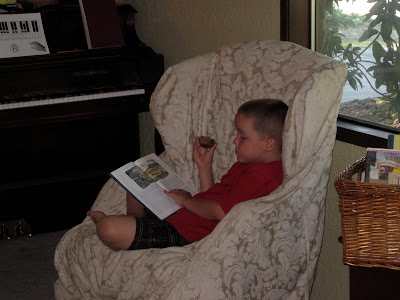 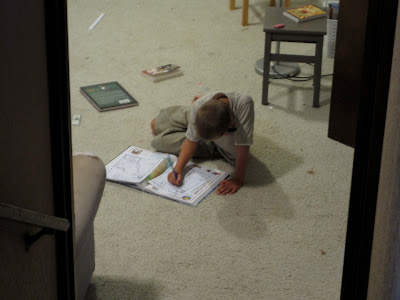 Wednesday was another stellar, hardly-believably-good day. Everything planned was done.

Remember Jaeger’s Wednesday quote? Well, this was his face when I handed him his math sheet next morning: 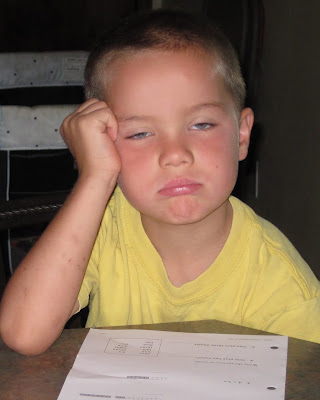 Thursday the hiccups finally started coming out. It was rough, and Hans didn’t finish his work until 5pm (learning a lesson on dawdling, we hope). Ilse was still upbeat. 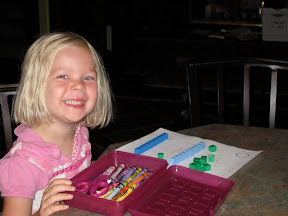 That is, as long as her will wasn’t being crossed. And I’m such a mean mommy. I insist upon crossing it frequently.

This is Circle Time, immediately following the above math lesson. As you can see, a bit of Scripture, a prayer, and some singing, can help brighten attitudes considerably (even a Mommy’s, turns out). Plan B for Knox Sir this morning was “fussy babies go to bed,” so we could actually hear ourselves sing this time! Um, not that that was actually anything anyone would want to hear. 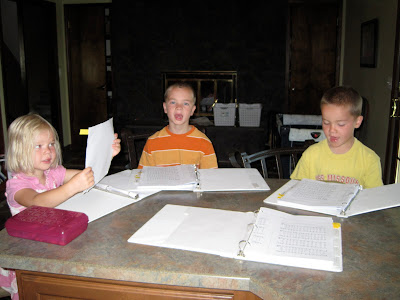 Even though things got rougher, we still accomplished all the work planned for the day.

As long as you don’t count housework.

Friday was an action-packed day. We got in our hour-and-a-half in the morning, then ran errands (including a Costco lunch) until 2pm. We then had our first afternoon tea — which the children have been looking forward to since they read my notes a couple months ago — at 3pm. 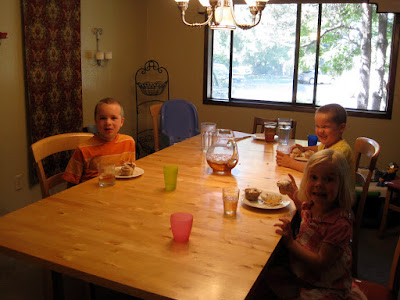 It went very well for a first attempt. I think Hans will be more prepared in the future, now that he knows he’s going to be accountable for remembering and thinking on his readings longer than 5 minutes after reading them. I used Buck Holler’s outline on discussing literature, and I think it’s sound, even for young students. Jaeger — who remembered what he had read — did great!

And 95% of everything planned for Friday was accomplished.

A whole week with a checked off checklist for school? I don’t think I’ve accomplished such a thing yet in our brief career.

Here’s hoping to this becoming a habit.

It is tempting, this time of year, to skip right to discussing next year’s plans...

Not only can these fairy-tales be enjoyed because they are moral, but morality can be...

This week in reading… Current favorites at our house In Elementary Lessons, twice per week,...

Since school planning is not only on my mind as we prepare to begin, but...

I wrote this series one year ago at A Healer’s Geste, and am reposting the...