I think I first saw this concept at Linda Fey’s Charlotte Mason Help, but I know I saw it several places and had tucked it away as an idea “for the future.” While I was planning out this current year, I reminisced a bit about my favorite literature “class” I tutored with 5 amazing high school students. We met at 1pm (during nap time) for coffee, treats, and discussion. I gave the reading assignments and had the discussion prompts, but I didn’t really “teach.” Their moms did the transcript tracking and didn’t need or care about tests or grades, so we just had an awesome book club. We talked through the prompts together, most of which I had gleaned from The Well-Educated Mind. I loved that year and it was great, even though I gave birth to my third baby during that year. I had already read most of the books, so I got to reread and have great discussions with great teens (who were only 5-6 years younger than me, anyway).

The entire year while preparing for each “class” I would think, “This is what I want to do with my kids, and hopefully their friends, too.”

Then while planning last year I came across the quote by Wes Callihan that had inspired that year:

Read the best books and talk about them with like-minded friends. That’s been the essence of real education since antiquity, and nothing about our modern world changes that except perhaps the pandemic idiocy that gives this idea even greater urgency and even less chance than ever of being taken seriously.

So, I decided, why not start now? I needed a way to communicate to my kids that I like them, that I want to talk with them. Why not make a time for sitting and doing it in a somewhat adult-like fashion that they would eat up? 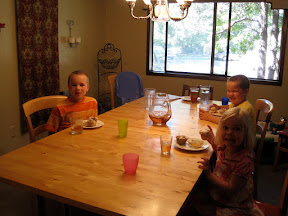 So, Fridays we were to sit, have a snack and tea (or lemonade in the summer), and talk about the week and what they read and learned. At first I started off with a prompt-sheet to direct our conversations and I took notes as a sort of record, to replace any sort of testing or other work. After a few weeks I dropped the note-taking, deciding it was officious to sit there taking notes on what the kids were saying when I was really supposed to be listening and engaging.

However, halfway through the second term, life started interfering more and I stopped trying so hard to make it happen. At the same time, I was finding their narrations during school time to be painful for us all. They were tug-of-wars and irritating to both mother and child alike. So, I dumped immediate narrations and changed “tea time” to be daily during snack time. The boys were to do their reading during quiet time, then during snack/tea, they’d get to share about it. Suddenly, they couldn’t wait to talk about it, when it was a conversation and a treat and not something on the “to-do” list.

They always seem to give better narrations and have better discussion about what they’ve read when they get some processing and mulling time, anyway; the read-and-give-an-immediate-response model seems to freeze their brain. Plus, when they know they have to narrate immediately afterward, I noticed they were reading differently — putting it in short-term memory rather than getting interested and engaged while they read.

Now, such narrations are a cornerstone of Ambleside Online and Charlotte Mason’s method, and I’m sure that we had trouble with them primarily because I never laid the proper groundwork for them and didn’t follow the precise CM method for them. For those who do that, more power to you. I think it’s great.

However, this works better for our style, for a mommy and students who all want to be setting the agenda and be in charge and not have to follow someone else’s rules. Plus, this is the sort of thing that has always been my aim for the older years; I have found it can actually begin now. Planning to have it weekly meant it only happened one or two times a month. Planning to have it daily means it happens two or three times a week, which I count as pretty darn good.

Additionally, none of my kids are really chatterboxes (yet, Knox probably will be if he ever starts talking), so a time set aside for conversation and give-and-take is good for us all.

Perhaps my children can become better conversationalists than their mother. Perhaps even my skills can be sharpened, practiced with 8 and 6 year olds. This week’s chapter for the Hidden Art of Homemaking book club is on writing. Well, here, my efforts in this vein are not very hidden at all. I love to write because I love to play with words. I love to be able to express myself articulately, and writing is the only way that happens….

Have you yet discovered Auntie Leila at Like Mother, Like Daughter? She has a great series called The Reasonably Clean House. I have a weakness for reading articles and blog series that claim it is possible to have at least a semblance of order and cleanliness while homeschooling a brood. Keeping things clean does not…

During this series we’re talking about the organizational habits that help us stay on our game during the busy school season. Previously, I’ve developed Assemble : get it all out on paper Act: process the lists Arrange: setting up and organizing This week we’ll discuss assessing and then next week we’ll wrap up with “Aim”:… Scholé is not just something we do for or with our children. Scholé is for everyone, including homeschooling moms. Whether you call yourself a classical educator, a Charlotte Mason mom, an eclectic homeschooler, or something else entirely, you need to draw on the wells of learning yourself in order to model the life of loving…

Once or twice a week, my two Latin students (aged 9 & 11) and I sit down to do Latin together. I hand them a parsing worksheet I’ve made and I have my Henle stack. I work on the next Henle exercise until someone needs help or thinks they’re done (they aren’t done until it’s…

Alright, so I’m in for 6 weeks of a “cheerful chores challenge.” This summer I’m working on shoring up our housework routines while we aren’t doing school so that when we start school again in July (we school year-round), we will already have those patterns learned and won’t be adding everything at once. Festina lente….