Originally written and posted in August 2011

So I redid our memory work routine at the end of the 2010-2011 school year, for several reasons:

So, I took her system, but, of course, I modified it.

So, here’s my binder layout: 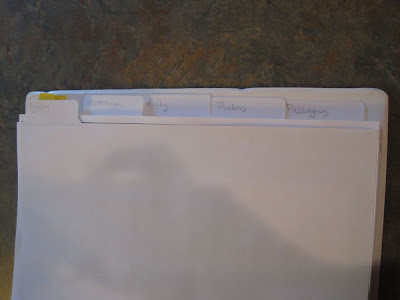 A) Hymns: The first hymn when you turn the tab is the hymn we’re learning. After that, all the hymns we’ve learned are alphabetical. A yellow flag is stuck on the second hymn we’ll sing. So we sing the hymn we’re learning, then turn to the yellow tab, sing that hymn, then move the flag to the next page. We just cycle through the hymns we know regularly, but without some hymns getting skipped because a a particular day of the week tends to get skipped. 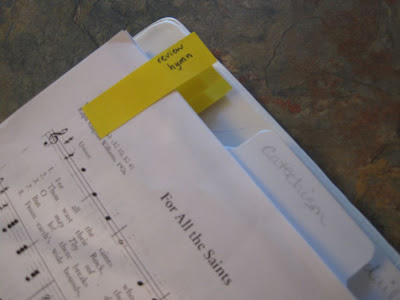 B) Catechism: I have 5 Catechism for Young Children questions per sheet (give or take; I tried to keep related questions together), and then 1 or 2 of the 12 Heidelberg we know on a sheet. A yellow flag is on one sheet (it started out on the first sheet, and we all move it together), and we read the catechism on that sheet — I read the question and they read the answer. When we’re done, we move our flags to the next sheet for the next day. 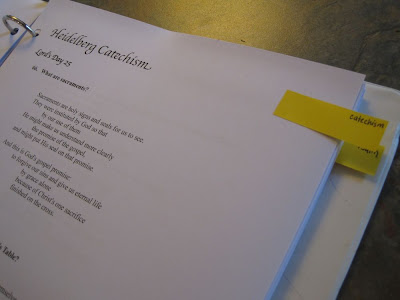 C) Daily: In this tab is the Psalm and the passage we’re working to learn this term. We read all sheets (2) behind this tab every day.

D) Psalms: These are Psalms we’ve already memorized (I’m using that word loosely; I already admitted that retention has not been good). Again, there is a flag on one, we read that one all together, then move the flag. 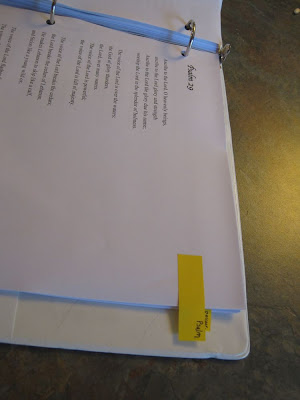 E) Passages: These are the non-Psalm Scriptures we’ve memorized. We turn to the flag, read that one, then move the flag. 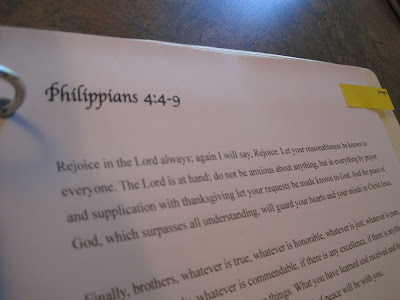 I was a little cautious in my hopes about how the whole moving-the-flag procedure would work in practice, but it worked like a charm. We used this binder for about the last month of our last school year and it went like a breeze. No balking, no excuse for remaining silent, and a feeling of ownership with their own binder. We have 8 Psalms behind the Psalms tab, so we should be reviewing each one at least every other week. There are 10 passages in the review passages section, so they too should get hit every other week. This will be good, because really we will be memorizing them in earnest all over again. There are 35 pages of catechism, so we will only go through them all roughly once per term. Eventually I might break some out so we have less frequent and more frequent passages (like Sonya’s 31-days-tabs), but for now I think this will work best for our situation.

I also still have all our memory work on a playlist, and we sometimes listen to it in the car, or the boys listen to it on an old iPod shuffle during quiet time.

The binders helped Circle Time flow as smoothly as it ever has at our house. I only had to replace the moving tabs once, but now near the end of the year the binders are cracking and pages are torn or missing, so they will have to be redone. Next week I’ll show up my new versions, made more durable for daily boy use. So many people give up on homeschooling when it comes to high school, but there’s no need to get intimidated. Home is still a great place to give our students a quality classical education, as long as we provide them with the supports they need to finish well. You can homeschool high school classically. I’ll… When you’re just beginning to homeschool preschool, kindergarten, and first grade, it can be an overwhelming challenge to decide what, out of all the sparkling and pretty and slick curriculum packages out there, to settle on and use. I’ve taken 5 children through this stage and I can testify: Children develop at different rates, at…