My husband doesn’t care much for spaghetti.

I think it’s the tomato sauce that puts him off.

Then one night we went to a friend’s house for dinner and she served a tomatoey pasta dish.

So, now it’s one of my go-to easy family dinners and I call it:

A recipe for people who think they don’t like spaghetti.

In a skillet, brown:

While it’s cooking, set a pot of water boiling for noodles.

The secret to making it not-spaghetti is to use penne or other shape noodle rather than spaghetti noodles, and use diced tomatoes instead of sauce. It’s the ease of spaghetti, done just differently enough to be — different.

Once the beef and sausage is done, add the following to the skillet:

Boil up enough noodles for the family, drain, and mix in with the tomato/sausage sauce.

Voila! Serve with a salad and you’re set.

This meal takes less than 30 minutes to prepare and it’s satisfying and tasty enough to be featured on a weeknight company menu.

Another bonus to this version of the classic is that if you have young children who make a big mess out of the long stringy pasta, penne or some other small pasta shape is much more easily eaten with a fork or even fingers by the younger set.

This family-friendly meal is much less messy than the original.

I tried freezing this meal, but it doesn’t reconstitute well. However, it’s so simple that it might even be faster to simply freeze cooked sausage and beef — with onions! — in dinner-sized blocks.

Then dinner prep would just be dumping and heating the already-cooked ingredients while boiling noodles.

Try it out on your spaghetti-skeptics and see if you can’t please even them! Ack! No milk! Off to the grocery store! Was there something else you needed? There was, wasn’t there? What was it?   Oh, look, this is on sale. That isn’t, but I think I need some. Might as well wander down this aisle to shortcut to the other side. Oops – walked straight past the pasta,… We’ve all experienced it. The frustration when right after folding the towels, an infant crawls over and spreads them around the room. The exhaustion of cleaning the corners in one area, only to find the area we cleaned yesterday has been – heaven forbid – used and dirtied already. The surprise that the grocery run…

Homeschoolers use their homes hard. What cleaning tasks give us the biggest bang for our time bucks? What chores prevent chaos best? That’s what today’s list is all about. If only I were as good at doing my lists as writing them. But this month, I’m doing the fun part: writing and sharing my homeschool… 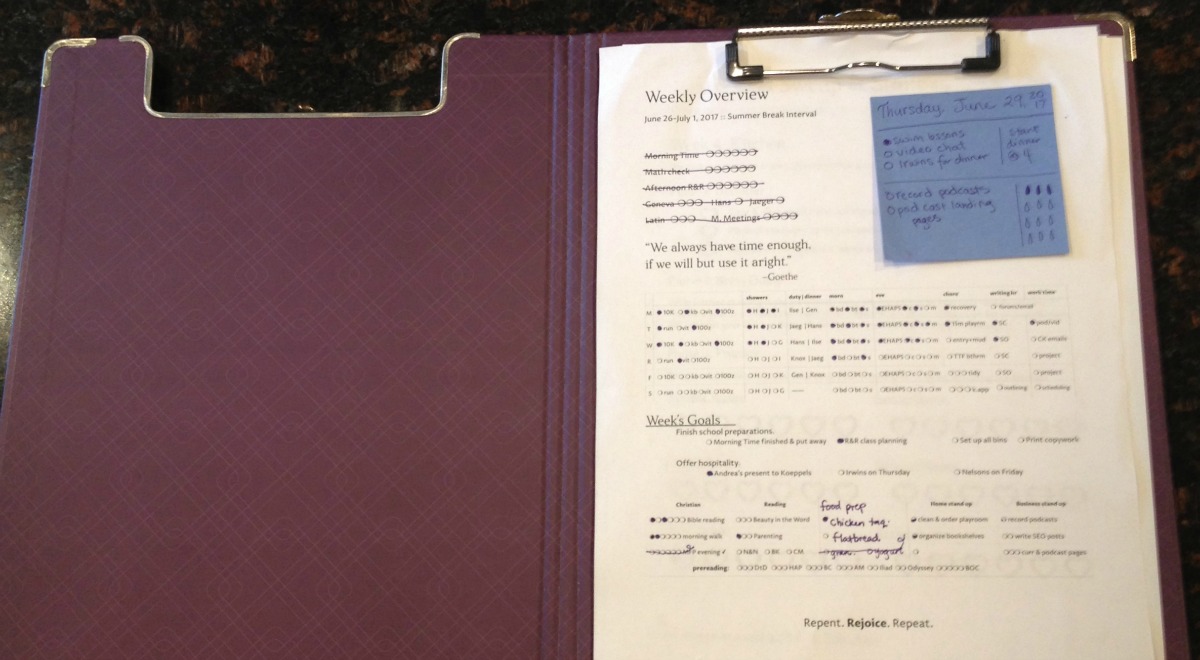 For nearly a year I gave all-digital planning another go. I tried a few different configurations, a few different apps and options – all in the name of research! – with mixed success. I tried Evernote for a weekly summary note and a place to keep routines. I tried a spreadsheet version of my previous… As I attempt to shed my baby weight this year, here is one yummy snack or lunch I’ve discovered: Grown-Up Ants-on-a-Log Wash and cut celery sticks. Spread with cream cheese. Dot with a few Craisins. The end. Eat. These also make a fast, easy, and healthy appetizer for parties! Plan ALL the meals! The Simplified…