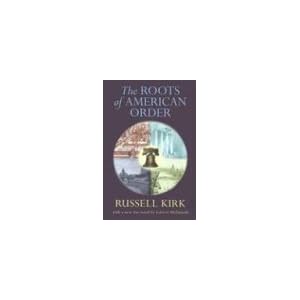 This is my contribution to Cindy’s Book Club on Roots of American Order.

In chapter 8, Kirk describes the shift toward modernism that began in the civil wars of seventeenth century Britain.

A fundamental paradigm shift occured during this time that allowed a previously untenable concept: a secular government. Societies have always been built on the foundation of a shared religious belief. And just what allowed this shift?

A changed belief about what man is.

And I was struck with just how many remnants of the modern philosophy of man still find expression in my own thinking and doing, though I avow the Christian belief that man is created in the image of God for the purpose of knowing and glorifying God by taking dominion of and stewarding creation.

The innovative theory of the seventeenth century was that man is primarily a self-seeking, self-interested economic being, rather than a duty-bound creature capable of honor and integrity.

Instead of the ancient & medieval concept that the best men are the honorable men, the men who put their place and people and position above themselves, Hobbes and others taught that men are simply self-aggrandizing individuals, obliterating the need for a hierarchical society, for a moral order. Duty requires authority, submission, and responsibility; self-interest only requires looking out for number one — it is easier to manage, manipulate, and control.

This concept dovetailed with another concept I have been pondering lately: motivation & rewards. I listened to an audio version of Drive: The Surprising Truth about What Motivates Us — you can watch an RSA summary video to get the gist — where he claims that the carrot & stick model, the rewards model, the view that man always seeks to maximize his own economic status is simply not true. Interestingly, he shows that this model was created during early industrialization, and it created methods for control of individuals by those with money and power.

What are some ways we can still, even in our Christian homes, think about our children as purely economic, self-seeking beings?

What are some ways we can treat our children as image-bearers of God?

Can you think of some other ways we treat our children as either self-aggrandizing individuals or duty-bound community members? Scholé is not just something we do for or with our children. Scholé is for everyone, including homeschooling moms. Whether you call yourself a classical educator, a Charlotte Mason mom, an eclectic homeschooler, or something else entirely, you need to draw on the wells of learning yourself in order to model the life of loving…

Denise Eide’s Uncovering the Logic of English made it to the top of my to-be-read stack because I wanted to see what she had to say before I get started with real reading instruction for my newly-five-year-old daughter. Thankfully, my conclusion confirmed on every page was that the best thing to do was continue with… Garlic is on the top of any list of pantry essentials. Its flavor adds to almost any mealtime dish. Of course there are many “convenient” ways to get garlic into your cooking: Garlic powder Jarred pre-minced garlic Jarred whole garlic Garlic paste However, nothing beats the clean taste of fresh garlic. And since garlic is…

We come at last to the fourteenth and last chapter of Edith Schaeffer’s Hidden Art of Homemaking, posting chapter by chapter with Cindy’s book club at Ordo Amoris. This chapter ties all the preceding topics back to the original concept of Hidden Art being a development and expression of oneself. In the beginning chapters, Edith…

October was a much better reading month. My deliberate efforts to cut my time wasters, to choose reading instead as a rest activity, and to include reading in the morning and evening are paying off. The pay off is not just that I finished twice the number of books, but also that my mind feels…