This is the fourth year we’ve done Circle Time. I’ve read before that school teachers take about three years to adapt and figure out the ropes, that, until they hit three years, they are still a “newbie.”

And now that I’m in the fourth year of homeschooling, even though it’s been a year with a lot of flux and laxity, I do think the same is true with homeschooling. It takes a few years (of intentional working and experimenting!) to develop your groove, your style, and your skill. 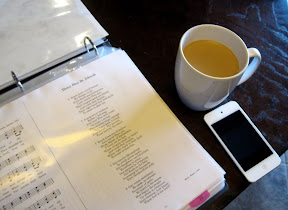 A couple years ago Kendra Fletcher of Preschoolers and Peace came out with an eBook called, “Circle Time: Plan the Best Part of Your Day.” She gave away a few copies and I won one. It’s a very helpful little book, with a lot of grace about flexibility and seasons of life. By the way, it’s also only $1.99 through January only (and it’s not even an affiliate link – I just recommend it and any of her MP3s, too). I think it was our second year of school and Circle Time and I remember “Best Part of Your Day” being a phrase that stuck in my mind.

Because it definitely wasn’t.

Quiet time was definitely the best part of the day, and I’m not talking about early morning devotions.

Circle Time was like the refining fire that brought out all our impurities. No one could sit still (though they did perfectly well sitting for dinner and for church), half the time at least half the “participating” (I use the word loosely) children (at that time half would be one) were uncooperative, and my oldest and I spent much of the time vying for control of the situation and routine. Repeating catechism or Bible verse lines after me was more often than not physically impossible and almost every aspect of the entire half hour (often dragged on for an hour or more) seemed to bring out the worst in us all. My oldest isn’t strong willed – except for during Circle Time.

It clearly was good for us.

Between Kendra and Cindy touting it as the best thing ever, I wasn’t going to give up easily, and I was determined to win any parent-child battle-of-the-wills (strategically, of course, not by brute force: outlast and stay in charge).

Finally, this year, the crop is starting to bear fruit.

I attribute it to these factors: 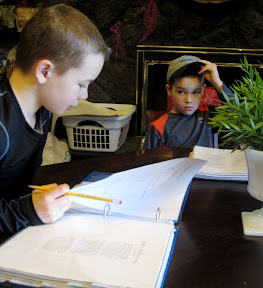 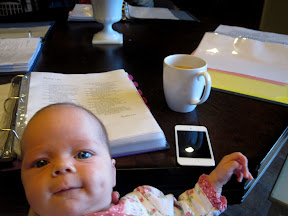 So, if you are in the midst of that Circle-Time-as-Chaos phase, be encouraged. It might take 3 years to overcome, but it’s worth it. Those early years without older kids is just flat difficult. Change things up, problem solve, get creative, and persevere. Those little ones will be your leaders in just a few short years and be your assets that will make maintaining much easier with the next round of chaos.

I still have a temperamental 5 year old. I have the most chaos-inducing toddler of them all. I have a newborn who is no respecter of schedules or school times. But I have two fluent readers who can still carry the show if they stay on board and if I captain cheerfully.

The 5 year old can participate or not as she deems. She doesn’t make or break us (when it was just a 7 year old and 5 year old, the 5 year old could make or break it). She is still hearing it all and it’s soaking in whether she likes it or not. She’s still catching it, even if she thinks she’s refusing it. 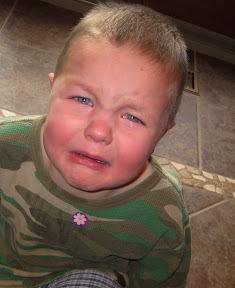 The toddler can (and does) fuss and get in and out of his chair and interrupt and otherwise make hay. We soldier on, ignoring most of his antics. And, he can be banished, and we can still go on; he’s already learned he’d rather stick around be a part of this family culture thing than be solitary in his room while we’re singing and declaiming. And, for our part, we want him, too. So we’re willing to speak up and put up with his activity. He sits for dinner, when Dad reads the Bible aloud, and for church. He doesn’t have to sit still for Circle Time.

When one reader puts up protests, the other is quick to step up and take over, which provokes the would-be-mutineer to either buck up and continue pulling his load or risk banishment.

The only thing that can really derail us now is my own attitude and my own responses. So, we still have plenty of trouble.

But, in our fourth year, the thing is that we all really, truly enjoy Circle Time when we are all in fellowship. 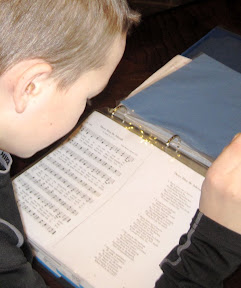 Singing together is very bonding. It is also mood-lifting. I don’t think you can stay a mean and upset mom while also singing a hymn with your children. Often, bad attitudes all around melt during the opening hymn. Thus, singing is now sprinkled throughout Circle Time: beginning, middle, and end.

My readers are not getting the skill of careful listening and duplicating nor of precise rote memorization. But they are gaining skills in inflected, well-articulated reading and in fluent hearing, reading, and understanding long paragraphs of good, strong English (without it being broken up by phrase or sentence). Every day or once a week, we hear the same Psalms over and over, and the phrases flow over us, softening and shaping. Every day or once a week, we say aloud the same New Testament paragraphs, not separating the application verses from the doctrine or doxology verses, but letting the whole connected thought pound its way in day after day.

Now, at last, our Circle Time really does resemble a circle with us all around a table. And we all sing together, we all read aloud familiar Bible passages together, we echo catechisms and mottos and creeds. And, even in the daily messiness and craziness, it is the true blessing of a family unity and a family culture being birthed.

Yes, in fact, it is like birth. In that moment, it’s all pain and overwhelming work. No one (in their right mind) wants to go through labor and birth. But we all want that little person that comes after all the trouble.

In its own little way, Circle Time is a labor and a trouble. It still often is. But it’s worth it in the end. And, in those precious moments in the midst of it where the glimpses of perspective are granted, it’s beautiful even in the midst of it. I like to talk about education philosophy and principles much more than methods, though I... This month I am taking you on a tour of my favorite organizing solutions. They...

Originally written in April 2010, near the end of our first first-grade year. Now we... There are so many books out there. How do we choose what to read? Should... In “How We Homeschool Latin“, I said that there are generally three reasons given for... Although my book club just finished reading and discussing chapter 4 of Norms & Nobility,... It’s time to be browsing curriculum materials for next year, and I am excited to...

As a busy homeschooling mom of 5 kids, here are the supplies I use daily...