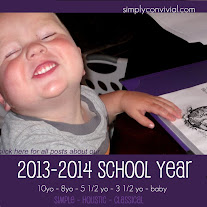 We continue to plug away slowly at Latin, but our momentum picked up in the last few months of this school year, so I’m hoping to build on that and keep it chugging next year.

Two years ago I started Hans (now almost-10) in Latin for Children Primer A. Even with our increased momentum the last few months, we ended still in Primer A with 4 lessons to go. This coming year, Hans will wrap up A and move on to B and Jaeger (8) will begin A.

My goal is that we actually learn the Latin we study, not necessarily finish and check off a curriculum box, so the book does not determine our pace or when we are finished for the year. If that means we do “less” Latin in terms of progression of texts, but we actually do know that Latin, I’m still happy. Multum non Multa: Much not many. I am in favor of the mastery approach to learning.

And, yes, I am using the first person plural: we. We are learning Latin. I still have the advantage in the studies and have simply done the work along side Hans because Latin for Children spends plenty of time on grammar, which I already know (and I had several years of Spanish, so I had a head-start on conjugating) and I am able to connect the Latin vocabulary with Latin-based words I already know. If Latin is actually a good thing to study, then I am going to study it with my children and prove it rather than play hypocritical teacher-mom. Moreover, even though we are using the Latin for Children video lessons, if they are actually going to learn it, they need someone to bounce their work off of, whether they need help or not. I want this house to be a community of learning, not a group of isolated scholastics.

So, when the [cough] philosophy hits the fan, turns out I have to learn Latin, too.z

But, between my grammar and vocabulary head-start and Latin for Children’s clear and slow progression, I am simply working with my oldest, and not doing any studies ahead. So far it’s been perfectly adequate.

Still, I have a feeling that I’ll be able to help Jaeger work through A much more efficiently and effectively simply because it’s now fresh for me and I have the big picture of where the book is going and what he’s supposed to get out of each lesson.

Also, I have picked up a few tactics for practice, because we needed more conjugating and language practice than the workbook provided in order to get mastery of the concepts.

So, here’s my plan for moving us all forward in Latin this coming year. 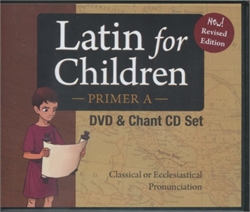 Mondays we’ll spend 30-60 minutes focused on Latin and either beginning the next lesson or working on the current hurdle. This is when we’ll watch the Latin lesson video (and they can watch each other’s if they want; I don’t care) and when I’ll carve out the time to make sure we really work on this subject.

This will be my hands-on helping and tutoring and learning time. The rest of the week will be independent assignments where I correct and help as needed, but just in the course of the day and not as a focused, instructional time.

No, I don’t know exactly how I’ll carve out 30-60 minutes to focus on Hans & Jaeger exclusively with a 5-year-old, an active 3-year-old, and a baby who will be moving by then, but I’ll let you know if I find strategies that actually work in real life and not just in theory. If it becomes necessary, then I will use screen time (computer games rather than videos) to entertain them (and have the baby in her ‘saucer); I don’t think that it would be the end of the world.

The rest of the week I will give both boys daily work in Latin to reinforce the current lesson and help them put together what they’ve learned so far.

I really like Classical Academic Press‘s materials, and I like Christopher Perrin and his quirky videos, but the workbooks don’t leave enough space for an 8-year-old boy’s handwriting and are too fill-in-the-blank focused to really provide the synthesizing exercises necessary to learn a language.

So, I will assign the workbook pages (Hans loves the derivatives page), but I will also assign things like:

This is where it becomes evident that I have to know what we’re doing. It is in working through these sorts of assignments that we really figure out how to do Latin (I have to figure it out, and Hans is watching me talk through figuring it out), and as we work through it, I am much more likely to see where his misconceptions and trouble spots are. 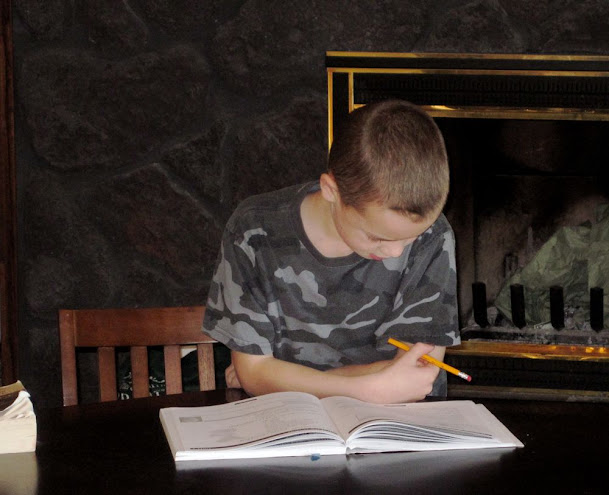 And, I am a mean teacher in addition to a mean mom. The assignment given is not done until it’s completed completely and correctly, whether it’s math or Latin. Some days (many days), it’s a slog with tears, but mastery doesn’t come by trying, getting it partly right, and receiving an 82%.

Latin is a brain exercise. That’s the primary reason we’re studying it. I don’t care if we ever read Homer or anyone in their original Latin. What I care about is that we are able to push ourselves past the point of wanting to give up and reach that summit where it dawns on us, “Hey, I can actually do this!” 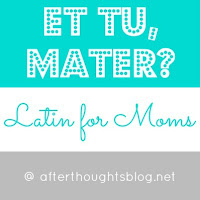 If you, also, find yourself needing to learn Latin with your child, make sure to follow Brandy’s series:

Not only was last week a school break week, but we also had and have...

Be sure to check out the other 5-Days series running this week. There are 21...

I was going through some old papers today and found a printed copy of this...

This week we’re discussing the rest of chapter 5, where, yes, Smith did say, “The...

My entry for the Poetic Knowledge book club. Finally. I’ve not had a “brain in...

Decorating I love the idea of decorating for Easter, but haven’t really made it happen...