I’m going to try mixing things up a bit and seeing how it works. I want to try out doing 7 Quick Takes on Fridays here at Simply Convivial, and do Pretty Happy Funny Real over at Simple Pantry Cooking on Thursdays. 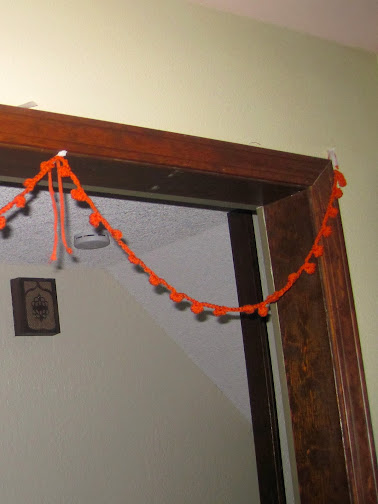 As I mentioned in the book club post earlier this week, decorating for birthdays does not come naturally or easily for me. I realized the day before his birthday that I had no orange or blue streamers (his current favorite colors), but I did have orange yarn. So, while watching some of the Downton Abbey finale, I crocheted a bobble garland. A couple years ago I had made a crocheted flower garland for Ilse’s birthday, and I have enjoyed having birthday decorations in the permanent supply instead of having to remember to buy streamers (which I don’t like dealing with anyway). It took about as much time finding a garland pattern that wasn’t girlie, but once I did, it worked up pretty fast. It turned out pretty well! I think I’ll be making quite a few more and wrap them around cardboard rectangles to keep them between birthdays.

For birthday presents, I tried finding things that might occupy my energetic four-year-old with or without a companion.

I selected a couple wooden board games that seem to be a hit so far. We’ll see if they occupy him when he’s in chaos mode on a school morning, after they’ve lost their birthday sheen.

I’ve almost given up hope of having any strategy other than muddle through juggling chaos with Knox, but one can always hope 4 will be a milestone in that regard – and it arrives just in time for Geneva to be entering the chaos-making stage. That’s how it works. she is all-in with the rearranging phase. First it was just the emptying every drawer and cupboard stage, and she still does enjoy that. But now it’s also the pull something out and walk around with it, depositing it somewhere totally random. I think I must have cans of tuna in every room in the house. They are her favorite thing.

And, when she’s “shopping” in the pantry, putting cans in her shopping cart to push around and around, how can I really kibosh that game? It’s so cute, too. 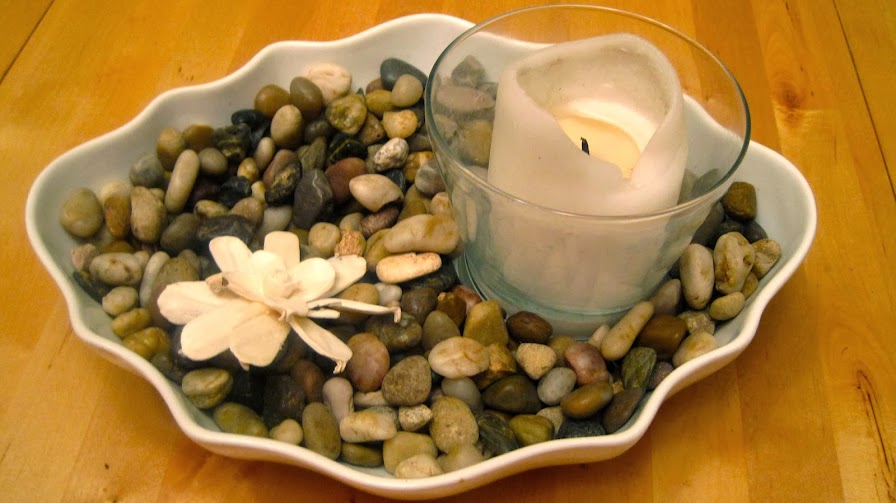 How often do I need a new centerpiece?

Remember last spring’s Hidden Art of Homemaking book club? And I wrote about finding a trick for centerpieces in busy homes with little ones? Yeah, after the flower in the photos I took for that post died, we didn’t have a centerpiece again until we brought home little pumpkins from the pumpkin patch in November. After that came the Advent wreath. And when I put away the Christmas things, I resolutely created a white January centerpiece (I like to replace all the Christmas finery with spare, simple, white decorations). February is almost over. How long before I have to change it out? 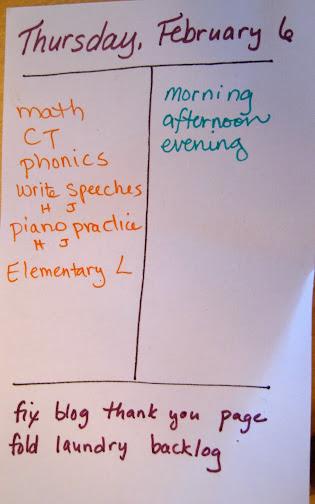 You know what happens when you record a video about how you plan your day with index cards?

The next week you only do it once.

I’m great with the organization ideas phase, the practical application side. But my day-in and day-out implementation stinks, and never more so than when I proclaim my good idea to the internet.

If anyone has any practical ideas for that problem, I’m all ears. Until, of course, I try it and it turns out to still be hard. Then I’ll go back to complaining, thank-you-very-much.

I vividly remember having two small sons, visiting a few older mom friends who showed me their curriculum and talked in-the-trenches homeschool talk to me, while I was still hardly even beginning. Nearly half of the material I use today is because of those two women – because they used it first and sold or gave it to me after they were done with it, my oldest being a year or two younger than their youngests (one of these ladies became my next door neighbor; the other tragically died of cancer last summer, making the many used items I had bought from her all the more dear).

That’s not weird, that was a blessing. What is weird is that a young mom with two small children came to my house this week, looked at my shelves, asked me questions about phonics, and sat in on some of our school day.

What does she think I am, an experienced homeschool mom? Crazy. That’s a question I’ve been pondering. I mean, I do make my bed every day now. Maybe, maybe someday I might even become a person who hangs up her clothes at the end of the day. That would be wild.

At the Dangerous Women conference held by the Femina Girls, Bekah Merkle spoke to wives....

My latest habit of making a “weekend reads” post has ended up taking a lot...

Last week Sarah Mackenzie did a webinar with Andrew Kern where Kern explained his careful...

Hello, dear Reader. For most of November and December, I will be posting [have scheduled,...

So, you have Evernote set up, you are using it to gather inspiration and ideas...

Originally written in September 2009 “I come in with something it took me three years...

So, here’s how it will work, if you want to be social and accountable during... by Christia Colquitt Have you ever read something that completely changed your mindset? The kind...