Because we are following the classical model of education in our homeschool, we have added Latin to our average days. I have zero background in Latin and only 2 barely-passed years of Spanish under my belt. Yet, I agreed with the principles of classical education so much that I decided we’d take the practice of Latin on trust and see what happened.

There are generally three reasons given for studying Latin:

When my son was 9 and had just taken his state-mandated standardized test, he asked me afterward, “Mom, what does donor mean?” “A donor is someone who gives something,” I replied. “That’s what I guessed!” he exclaimed, “because dono means I give.” That vocabulary word had been in a Latin lesson from the previous year. There is certainly something to the first reason for choosing Latin, but I hate to let state-mandated tests determine my curriculum choices.

No, it is option 2 that got me on board with Latin and keeps bringing me back to it every time we have fallen off the boat. I love grammar, and I know how much my smattering of Spanish helped with my understanding of grammar. I am also an Elizabethan history buff and I knew that simply translating Latin into English and English into Latin constituted a large part of Queen Elizabeth I’s education – and that seemed to turn out pretty well. So, we take a grammar-heavy approach to Latin rather than an immersion approach, which would be nearly impossible for us anyway.

But grammar, grammar I can do.

And I can do it even better when someone else is teaching the lessons.

Four years ago now I had to make a curriculum choice. My oldest was in third grade, and so it was time to dive into Latin. I chose Latin for Children because

My policy has been to rely on DVD instruction where possible for subjects I am not strong in. DVD instruction for subjects where I have zero knowledge is a must for me. The benefits of DVD instruction are two-fold. First, a recorded lesson can be repeated without the teacher losing his enthusiasm. Second, a DVD is non-consumable and can be reused for all the children at no extra cost (except for the price of the workbooks, of course, but the teaching costs the same for 5 as for 1). 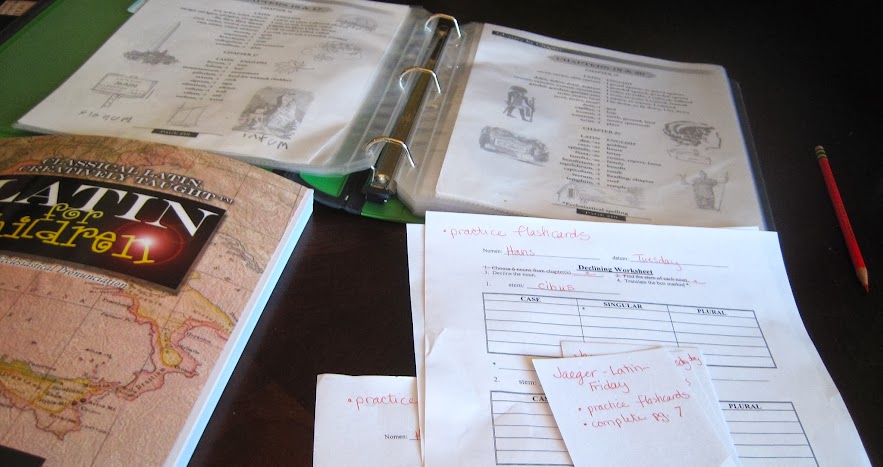 Dr. Perrin is funny and light-hearted, and my kids love the special shorts at the end of each lesson. The feel of the video lessons are homeschooly, in a good way: two to five kids chanting the vocabulary in a living room, with 8 year old boys acting like 8 year old boys and all. My boys could watch and mimic and identify with the chanting students.

Now, Latin has been hit or miss, quite honestly, in our average days. Too often Latin is what gets bumped when life goes awry. With a DVD and workbook, it would be easy to have my boys simply go through the motions of progress of Latin on their own: They can watch the video, I can assign workbook pages, and that could be all. But that is really just a waste of everyone’s time. No language is going to be learned that way. It’s all going to go in one ear and out the other and never stick.

So, rather than simply move on through the curriculum so we can stay on schedule and cover a book a year, we have taken the next step as we can and tried to master the lesson before moving on. This means a slower pace, especially since Latin might only happen twice a week rather than every day. But I’m ok with slow progress, especially if not finishing a book a year means we’ve actually gained the ground we’re covering.

I’ve been less apt to ditch the Latin when feeling the squeeze this year, choosing to prioritize it over other things. Also, I am sleeping through the night and don’t have a baby – that means fewer lessons get skipped than used to be. Perhaps when my third and fourth child start Latin we will actually be able to do a level a year.

Perhaps they will teach it to their children and so actually get to the point of reading Latin. Perhaps my grandchildren will be able to teach my great-grandchildren Latin through speaking it and actually achieve the immersion approach. Taking the long view helps ease the pressure of “finishing up.” This is a generational journey, not simply a school-year journey. I am planting seeds and do not know what fruit will be reaped 10, 20, 30 years from now. I am content to be planting little seeds and watering them as best I can, even while wishing I were a harvester of ripe crops – that’s not my place in the story.

Not only did I add Latin to our homeschool, but I have submitted to learning it alongside my oldest as we go – another thing that slowed our pace down. If a subject is worth teaching, it must be worth learning. So I have learned to be content with slow progress over time rather than checking all the boxes every day. Even for that lesson alone studying Latin together has been worth it.

So, as we work through Latin for Children , here are some things we do to reinforce the vocabulary and grammar. We don’t do all of these all the time, but these are the practices that have served off and on over the last four years and kept us at it.

But, the number 1 Latin for Children review technique we love is Headventureland! Latin vocabulary, declensions, conjugations, short movie clips, and derivative videos help reinforce the lessons. In order to unlock further levels and videos, they have to pass vocabulary games. As an extra bonus for me, the 5-year-old and 7-year-old are glued to the screen when the older boys do Headventureland, so I have fifteen minutes of quiet and those children are going to have a head start when it’s their turn to begin the study of Latin.

In fact, yesterday morning we hadn’t even done our usual morning things yet, I pulled out the math pages and went looking for where the children went off to because it was awfully quiet. A quick glance down the stairs and through the heads all I could see was that they were playing a computer game! What! Prepared to be angry, I asked, “What are you doing?!” Heads turned, eyebrows raised innocently, and the response came: “Latin.” Ah. Yes. Well, then. Carry on. And it’ll be time for math when you’re done.

I have used Headventureland as a reward for finishing other tasks before lunch.

I have used Headventureland as an excuse for school while morning sick.

I have used Headventureland as a daily review option to be completed along with further Latin work.

Right now, 15 minutes of Headventureland is on each boys’ daily checklist, partly because they are both excited about the new version Classical Academic Press has released.

Headventurealand for LFC Primer B – the level my oldest is in – just released! He is thrilled with it. I’m not sure we’d be able to practice those pronoun and preposition lists enough on our own without the automated, fun, quirky practice that Headventureland gives us. Our school year is over and I know many of you are also winding up. There’s something about the last month of lessons – no matter when that last month is. The paper piles seem higher. The dust and bits seem to multiply from the corners faster. The chaos builds quicker. Maybe when your school… End-of-chapter quizzes. Fill-in-the-blank comprehension questions. Tests. We don’t do them. But the seventh law in The Seven Laws of Teaching states that “no time is wasted which is spent in review.” However, it stipulates, it should be gone over in new ways to really cement the information. Well, I’m not sure if we’re really cementing…

This year I am homeschooling only my youngest 3. My oldest graduated high school with his two-year degree from the community college last year and my second son is currently taking full time dual enrollment classes at the same community college. Ilse is 14, in 8th grade, and in Math-U-See Geometry, Antiquity from Compass Classroom… There are so many choices to make when we start to homeschool. And the question: What homeschool curriculum best fits our style and needs? is at the top. After over a decade of homeschooling, here is what we’ve found works for us. Take, mix with brains, and experiment with curiosity to find out what works best for… The tenth chapter of Hidden Art of Homemaking by Edith Schaeffer is titled “Drama,” and I admit I was concerned. I rather share Fanny Price’s skepticism about amateur drama beyond the Shakespeare speech or poem recitation. Turns out, my trepidation was needless, because that was particularly the sort of dramatic expression Mrs. Schaeffer is encouraging,…