When I was 11, my mom had twins. Already interested in cooking, I eagerly took once-a-week dinner duties. I could make spaghetti, macaroni and cheese (from boxes) with tuna and peas, and hamburger helper. My grandma was an extreme couponer before it was a thing, so she kept our pantry stocked with boxes and mixes, and I appreciated being able to grab something, follow the 3 steps, and put dinner on the table by myself – complete with microwaved frozen mixed vegetables.

I think kids that age want to be useful and contribute in real ways to the family, and what is more useful than feeding people?

Actually, this project first began this summer when an extended-family conversation turned to sending my younger brother off to college and how he was renting an apartment off campus. “You’ll have to send him Simplified Dinners,” commented my mom. I pulled my printed copy off the shelf to let him look through and chatted about how easy the dinners were. He stopped me, “So, saute is like cutting them a certain way?” Oops. Nevermind. Simplified Dinners is not going to work for you. Simplified Dinners presumes kitchen skills; it is written for busy, harried moms like me who just want to get dinner on the table but don’t want to have to think through everything or read a long discursive recipe. It’s dinner shorthand, presuming you know the lingo.

I decided my brother needed a Simplified Simplified Dinners; one that didn’t presume any kitchen experience.

Now he has his own edition of Simplified Dinners for New Cooks: 13 tools, 16 skills, 10 dinner types that each have three or more variations.

And working on this new version has worked out pretty well for me, too! I plopped a page of my draft in front of my 11 year old and said, “I think you can make dinner all by yourself. Let’s see.” And he did it. And he asked to do it again the next day. So he and his brother tested the clarity of instructions for me, and I refined wording, and our work is nearly complete: Simplified Dinners for New Cooks is nearly ready for publishing. My 9 & 11 year old boys really are thrilled to be able to be independent in the kitchen, get dinner on the table themselves, and receive all the thanks due to the cook at the table. 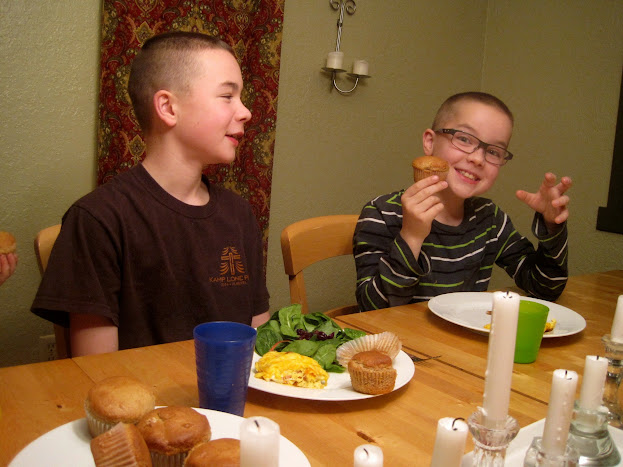 At his age, I cooked Hamburger Helper and Macaroni and Cheese from boxes and zapped frozen vegetables in the microwave. It was a start, but not a start I wanted to have to live through at my own dinner table. We’ve grown up a bit in our taste since that time.

But I think we’ve proven that if you can wield a knife, you can get dinner on the table. Not just any dinner, either, but a real food, from-scratch dinner.

They have made pizza from scratch – including the yeast dough, baked bacon with frittata and muffins, salad with homemade salad dressing, creamy chicken pasta, sausage-and-beans, soup, chicken quesadillas, and more. Tonight they are doing homemade pizza again, because that was their favorite.

I am just as excited as my kids. What better way to outsource meals than to the people who need to eat it, too.

They aren’t as excited about outsourcing the mopping or the bathroom-cleaning, but dinner, yes, they’ll take dinner duty anytime.

This resource is all you need to teach your kids to be independent in the kitchen and take dinner duty off your plate some nights. Or if you aren’t so sure yourself about cooking from scratch, this book will make it simple and easy.

Board games are a hobby for my husband, and our family loves to play board...

This week we’re discussing chapter 3, pages 89-103, of Desiring the Kingdom, where Smith begins...

Homeschool Planning Series, introduction & index I am very much impressed by the people who...

I’m in a small online book club with my best friend (IRL! But 4 hours...

Simplified Dinners, even the gluten-and-dairy-free edition, is far from Whole30 compliant, yet I am still...