Habits are the Key

Habit is ten natures! If that be true, strong as nature is, habit is not only as strong, but tenfold as strong. Here, then, have we a stronger than he, able to overcome this strong man armed.

We have lost sight of the fact that habit is to life what rails are to transport cars. It follows that lines of habit must be laid down towards gi end ends and after careful survey, or the joltings and delays of life become insupportable. More, habit is inevitable. If we fail to ease life by laying down habits of right thinking and right acting, habits of wrong thinking and wrong acting fix themselves of their own accord.

It is pleasant to know that, even in mature life, it is possible by a little persistent effort to acquire a desirable habit. It is good, if not pleasant, to know, also, with what fatal ease we can slip into bad habits. But the most comfortable thing in this view of habit is that it falls in with our natural love of an easy life. We are not unwilling to make efforts in the beginning with the assurance that by-and-by things will go smoothly; and this is just what habit is, in an extraordinary degree, pledged to effect.

In the first place, whether you choose or no to take any trouble about the formation of habits, it is habit, all the same, which will govern ninety-nine one-hundredths of [your] life. […] As for the child’s becoming the creature of habit, that is not left with the parent to determine. We are all mere creatures of habit. We think our accustomed thoughts, make our usual small talk, go through the trivial round, the common task, without any self-determining effort of will at all. If it were not so–if we had to think, to deliberate, about each operation of the bath or table — life would not be worth having; the perpetually repeated effort of decision would wear us out. But, let us be thankful, life is not thus laborious. For a hundred times we act or think, it is not necessary to choose, to will, say, more than once. […] What we can do for them [and ourselves] is to secure that they have habits which shall lead them in ways of order, propriety, and virtue, instead of leaving their wheel of life to make unly ruts in miry places. 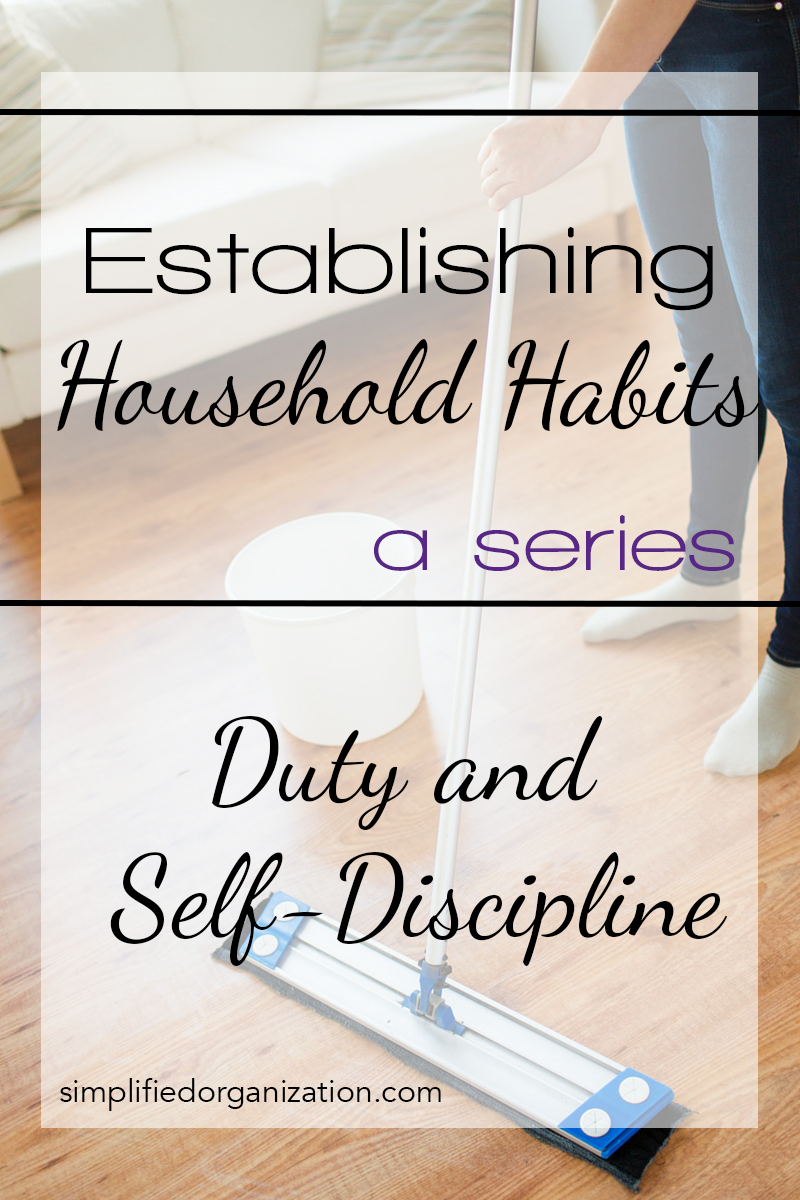 Routines are Pegs for Habits

When tasks become routine, they require much less physical and emotional energy. A normal day is easier to get through without having to make numerous draining decisions, answer questions from other family members concerning their direction, or feel the day has come to an end without getting anything done. You start your day with a plan already in place for what comes next. You know you will accomplish what you need to throughout each day unless the Lord brings unexpected circumstances. […] You can have the emotional resources you need to be pleasant with the children since your day is not in upheaval. — Managers of Their Homes

It takes time & effort to implement a routine, but once established, the routine decreases the amount of time and effort needed to maintain it.

Routine is simply a habitual pattern of living created by effort applied regularly over time. Once a pattern of living is established in your lifestyle and schedule, it becomes an invisible, self-generating force to hold part of your home universe together. The more you harness the power of routine, the more energy you will generate to apply to other areas of your home. However, if ignored, routine energy rapidly dissipates, and the elements within the home universe begin to disintegrate at rapidly increasing rates of decay. When that happens, even greater amounts of time and effort are needed to regain stability. — Educating the Wholehearted Child

As music has rhythm, recurring refrains, order, so does peaceful parenting. One action thoughtfully follows the next action that wisely follows the next. Days of habits, fluid and lyrical, create pleasing harmony. Lives with known rhythms, thoughtful arrangements, sing. […]

I watch my daughter sit before white keys, wrists arched, her fingers stretching into song. Each finger knows where to stroke next. She hardly thinks; it’s nearly automatic, unconscious. So goes our daily songs, the essence of our habits.

“Forty-five percent of what we do every day is habitual,” posit researchers. “This is, performed almost without thinking in the same location or at the same time each day, usually because of the subtle cues.”

We play a note that becomes a subtle cue for another note to always follow: rise and pray. Or check the internet. Or go for a run. Day after day we practice our chosen series of notes, the actions cued by other actions. We become a song. As Aristotle wrote, “We are what we repeatedly do.” […]

To sing new songs, we need to pay attention to our rituals, the beat of our days, even more than focusing on self-discipline.

For the power of association, what note accompanies a time and place, may in fact be more potent in habit formation than simple willpower. […]

If we want to form a new habit, we must associate that new, unfamiliar behavior with an established activity.

“Habits are formed when the memory associates specific actions with specific places or moods,” said Dr. Wood, a professor of psychology and neuroscience at Duke. […]

I watch my daughter play new songs and I know: learning new songs is often challenging, even frustrating. But once the piece is mastered? She plays nearly effortlessly. Too, composing a new refrain of behaviors, a chorus of rituals, is deliberate, slow, trying work. But once the behaviors become habits, rhythmic rituals, we catch ourselves singing without thinking.

And in reality, living in cacophony is more wearing than the hard work of practicing habits. “Laziness means more work in the long run,” writes C.S. Lewis. Flubbing away at whatever strikes our fancy leaves us in far worse dire straits than applying ourselves to the work of playing concertos.

Schedules are a Crutch

Schedules are the routines one wants to be run by, written down so they can be referred to until they are established.

Schedules are written down to eliminate decision-making. Just do it.

I was having to think about what everyone was supposed to be doing at any given moment, and the mental work of it all was exhausting me. If I write it down, I eliminate the repeated mental work. That’s step one. — Revamping Systems Part One, Kendra @ Preschoolers & Peace.

But for this season of my life, I need every little task spelled out for me. The distractions are aplenty and I need the thinking pre-done. — Revamping Systems Part Two, Kendra @ Preschoolers & Peace

Scheduling enables you to focus on your God-given priorities. […] [Your time] will have been used as you have chosen. The urgent does not push out the important. — Managers of Their Homes

So, I’m returning to my schedule until it becomes routine so that I train myself in the habits I want to establish. In 2011, I was able to host an online book club discussing James Taylor’s Poetic...

I missed my resolution to read at least one fiction book per month. I think...

So I’m going to take a page from Anne Bogel and sharing 7 5 things... ~ Capturing the context of contentment in everyday life ~ Another week and more food...

~ Capturing the context of contentment in everyday life ~ Another week, another look at...